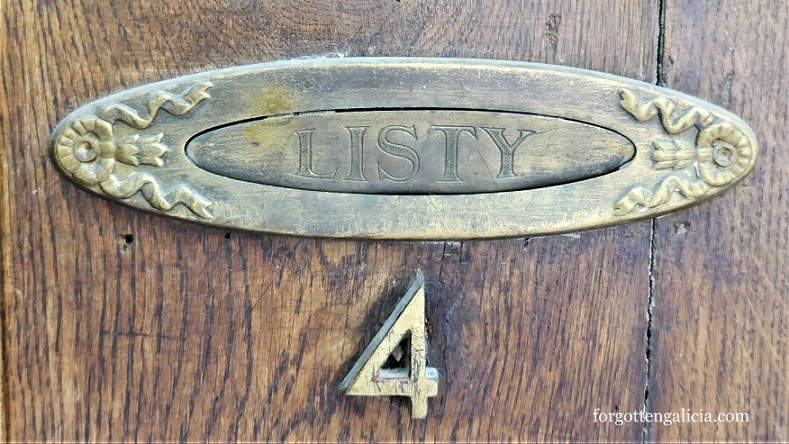 Last night someone stole the antique metal mail slot from my front door and the front door of my neighbor’s apartment. Mine was old but without an inscription, while my neighbor’s had the Polish inscription “Listy” (letters). To see the empty spaces on our doors this morning was quite depressing, a reminder that these traces of the past are ephemeral. The history of my city, which has become a part of me, is disappearing from right in front of me, literally.

It was another reminder to not to put off exploring, taking photos, documenting all these remnants of the past. I realized that I never did take a photo of either of these mail slots. I was never in a rush because I never thought the ones on my property were at risk…

My apartment’s door is original, from the 1920s, but at some point a panel was added to the front, thus covering the actual mail slot opening. The metal mail slot was kept nevertheless and reattached to the door.

For decades now mail in Lviv has been delivered to Soviet-era mailboxes located on the ground level rather than through these slots. But the relic on my door was a nice daily reminder of a different era when mail was delivered directly to each home.

Many mail slots can still be found around Lviv in their original locations, but the number dwindles with each passing year.

Those that have been removed or stolen, especially with the inscription “Listy,” often end up at antique stores and flea markers. A couple of years ago I purchased one, but now regret that I supported the business of stealing and then selling these types of antiques.

Many of these antiques are used as decoration in restaurants and cafes.