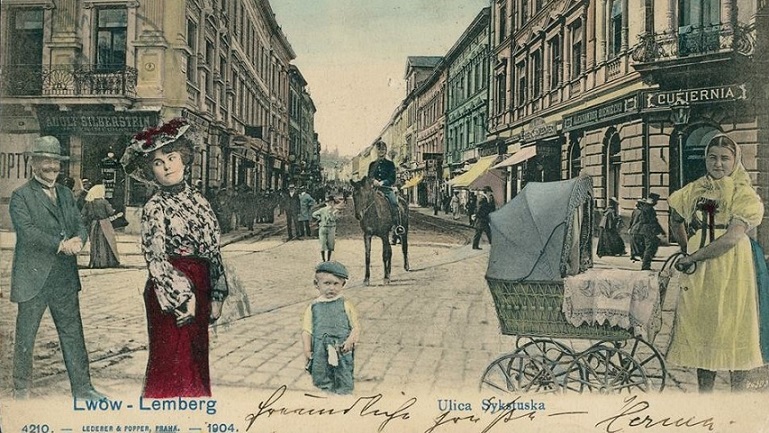 Over 100 years ago the Prague-based company Lederer & Popper created a series of colored photomontage postcards featuring various cities, in particular in the Austrian and German Empires.

I first came across a few photomontages from Lviv and was particularly struck by the one depicting a woman who had fallen from her bicycle. It seemed like such an unusual and rather humorous image to use for a postcard, so I wanted to find out more. As these postcards have the company’s name printed on them, I was able to find a little bit of information about the company as well as examples of montages from other cities.

The website Old Prague on Old Postcards writes that the company Lederer & Popper (Josef Lederer & Rudolf Popper) “designed, and probably also produced, black-and-white, coloured, and photomontage picture postcards with stamped embossed lithographic frames, etc. The collection of Prague picture postcards issued by this company is among the most extensive. They are usually marked by the sign, L. & P. or L. & P.P., (the last letter denotes Prague). In particular, the hand-coloured picture postcards from this renowned company are perhaps executed in the most satisfactory quality of all the picture postcards of old Prague; the hues are usually muted, approaching authenticity.”

In addition to montage postcards showing ordinary scenes, such as couples strolling in the park or people on bicycles, the company also produced a series of postcards of cities “in der Zukunft” (in the future) depicting chaotic and overcrowded street scenes with hot air balloons, elevated trams, airships, flying bicycles, and accidents on the road.

Interestingly, I noticed that several of the same people and vehicles were montaged onto photos of different cities. So we can see a certain smiling mustached man in Lviv and in other Galician cities as well as in a couple of cities in Germany. Or we can see that the same woman who fell from her bicycle in Lviv on Batorego Street had the same fall in Wiener Neustadt and St. Pölten! And we can see that photos of the Wuppertal Suspension Railway—now elevated much higher above the cities than the original railway—were used in many of the postcards from the future series, especially those depicting German cities, but also in the postcard from Sambir.

On the German website Spiegel I found the reason behind the use of the same exact subjects on various postcards:

“Postcards were produced cheaply and in mass. Since a good motif could be easily modified, allowing for even more sales, one finds the same accessories in the postcards. Publishers such as Lederer & Popper collaborated with photographers and stationery shops, which sent them photographs of their cities. Cutouts were added to the original photos, the desired number of copies was printed, and then they were sent back to the local business partners who then sold them.”

Cities “in der Zukunft” (in the future)

I even found one depicting Boston!

1 thought on “Lederer & Popper Montage Postcards of Galicia and Beyond”