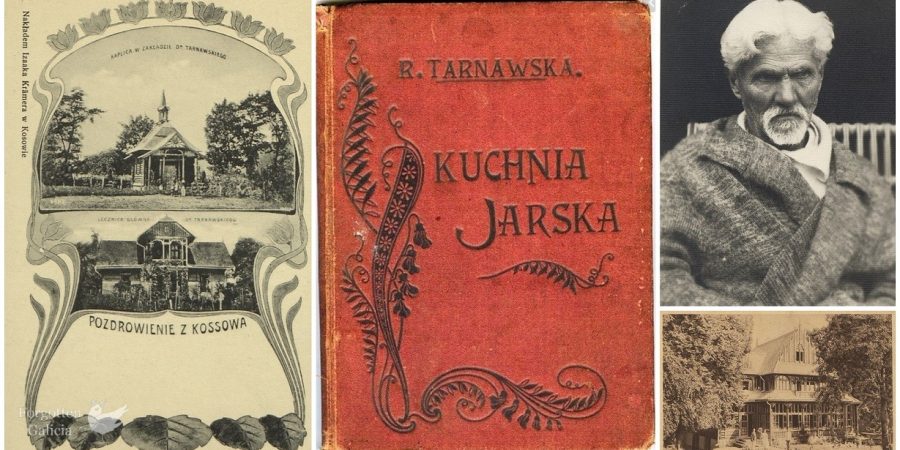 Back during Austrian times and up until World War II, the Carpathian Hutsul town of Kosiv (formerly Kosów) was a center of natural medicine and vegetarianism. This is thanks to Dr. Apolinary Tarnawski (1851-1943), a Polish physician who at the end of the nineteenth century founded a private sanatorium in Kosiv, where he practiced natural medicine and advocated vegetarianism.

Kosiv as a center of natural medicine

In 1891 Apolinary Tarnawski opened а medical and health complex in Kosiv, which within a few years became a famous sanatorium. This was due, first of all, to the fact that he used innovative rehabilitation and healing methods. The system of treatment developed by Dr. Tarnawski was based on the unity of three elements: air, sun, and water. Only natural ingredients were used to treat his patients and they were prescribed a vegetarian diet.

Due to the large influx of patients, with time the territory of the sanatorium expanded and new facilities were constructed. During the interwar period, the elite of Poland came to the complex, and there was no shortage of guests from distant lands. At its peak, the sanatorium was considered “fashionable.”

Тhe beginning of World War II led to the closure of the sanitorium, and the founder was forced to emigrate. Dr. Tarnawski died in 1943 far from his beloved Kosiv in exile in Jerusalem.

“Did you know that the Hutsul town of Kosiv 100 years ago was one of the centers of vegetarianism in Central and Eastern Europe? Behind me is one of the old buildings of the sanatorium, where from 1891 Dr. Apolinary Tarnawski and his family received guests from two empires.

Vegetarian dishes, jogging in the mountains, sunbathing, dousing in cold water. This is how Dr. Tarnawski treated the rich from Lviv, Warsaw, Prague, and Vienna. Born near Yavoriv (in the Lviv region), Apolinary graduated from the Jagiellonian University in Krakow and worked for some time in a hospital in Lviv. But in the end, his views on health differed significantly from the practice of official medicine.

The press at that time most often discussed Tarnawski’s practice of making his patients run around the mountains naked. I am more fascinated by the history of the restaurant, which operated at the sanatorium. His seasonal menu had a total of almost two hundred dishes, most of them local. While vegetarianism based on Asian dishes became popular in Western Europe and America, the Tarnawskis prepared Ukrainian and Polish dishes, occasionally interspersing them with something Italian or French. Or they created new dishes themselves, such as a version of the Viennese schnitzel using chopped barley porridge and mushrooms. It was ovo-lacto vegetarianism, that is, with the use of dairy products and eggs.

In 1901, based on the restaurant’s recipes, the founder’s wife, Romualda Tarnawska, published in Lviv (Lwów) a book of recipes and tips Kuchnia jarska (Vegetarian Cuisine).

The book was republished in Lviv more than twenty times [as Kosowska Kuchnia Jarska (Kosów Vegetarian Cuisine)] in Polish, and there were also English-language editions in London. By the way, if you look in the electronic library of the Polish vegetarian community, you will see that all vegetarian literature in Polish from 1901 until 1957 — at least from what has been preserved there — was published exclusively in Lviv.

As for Romualda Tarnawska’s book, in 2013 we translated it [into Ukrainian] from Polish and planned to publish it together with the Galician Cuisine Club. The war [in eastern Ukraine] changed everyone’s plans, funding for illustrations and printing ceased. So for now, I’m just sending a Word file to anyone who wants to, by mail. [You can flip through the Ukrainian version on the Roots and Seeds. Ukrainian Culinary Heritage Project website]. Not everything in the book is delicious: produce is different these days and tastes have changed. But the approach itself is interesting.

It is very cool to finally visit a place that I mentioned many times in articles and posts. It is a pity that there is so little left of the old sanatorium, and this last building is also gradually rotting.”