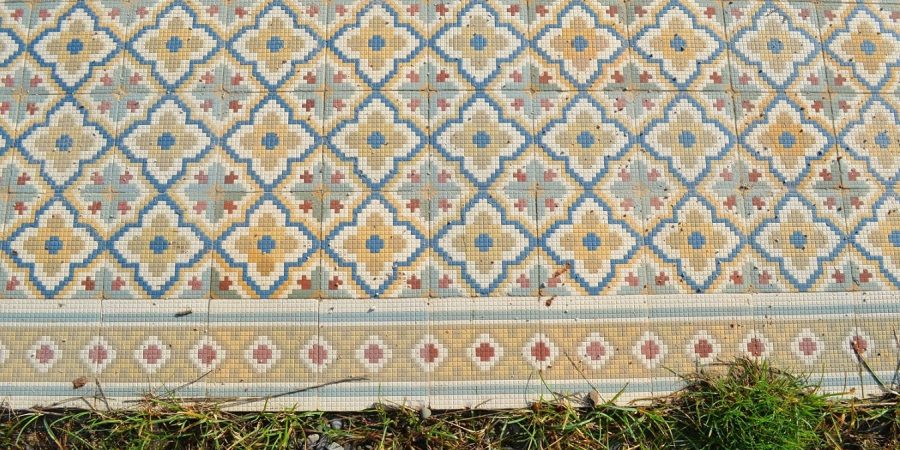 A bell tower was here, right here. Now we go inside… there was a white and black cement tile floor. But when the church was dismantled, they probably liked it, so they took it. But for some reason it was left at the sanctuary — maybe they had an attack of integrity.

Here was a stone altar.

And on all this lay a huge mountain of stones and bricks.

The first time after my deportation that I came to Łazy was in 1954, this was before I moved here permanently. Just to visit, out of curiosity. I walk from Radymno, I approach the village, my heart starts beating faster, I see that the dome of the church is already shining in the sun above the houses. I speed up my pace, reach the village, and — everything is off. In my imagination remained something else, bigger, more beautiful.

Even the river… is so small! When I entered it, it reached my belly, my shoulders! There was still a padlock on the church door. I don’t know who had the key to it.

The Polish word “cerkwisko” is known by Google and Wikipedia. It is also known by websites that describe the tourist destinations of southern and eastern Poland. It is, of course, well-known among the locals — the natives, the colonists or, not to go into details — the current inhabitants of this part of the country. Hikers in the Beskids, in particular, come across cerkwiska [plural of cerkwisko]. These are mostly places overgrown with trees and nettles, where you can sometimes see the remains of the walls of the former building filled with river stone or an iron cross. It happens that around the cerkwiska, among the lush forest, you can find a few more tombstones with forged crosses or step on plastic flowers or burnt candles left by some pilgrims.

But the word “cerkwisko” is not found in the official dictionaries of the Polish language or the PWN Encyclopedia (Polish Scientific Publishing House). This is just a colloquial definition of a not very popular fragment of Polish cultural identity. This word is also difficult to translate into Ukrainian. A cerkwisko is something smaller than the ruin of a cerkiew [in Polish “cerkiew” means an Eastern-rite church, as opposed to a “kościół” — a Roman Catholic church], but still something more than just its remains. There is something wild, unpleasant, distorted in the sound itself. Since the “church” is a temple, the heart of a certain community, the center of its world, the “cerkwisko” is a kind of anti-center, an unworthy end to a certain history, marginalized in the public consciousness.

Apparently, it is no coincidence that the word “cerkwisko” is similar to “cmentarzysko” — a grave field, an ancient cemetery. “Cerkwisko” is a cemetery of the church.

How Rubble Is Made

Dozens of cerkwiska can be found today in the Zakerzonia region, where many Ukrainians lived before 1947. At the same time, no traces were left of many structures, in their places new Roman Catholic churches or other public buildings were built.

A year ago, when the Notre Dame Cathedral of Paris was on fire, historian Eugeniusz Misiło published an article about the tragic fate of the Church of the Assumption of the Blessed Virgin Mary in Radymno. A giant building with three domes and a portico mounted on four columns, it was built in 1911 at the expense of the local Ukrainian, Polish, and Jewish population. It was designed by the most famous architect of Galicia at that time — Vasyl Nahirnyi. The monumentality was appropriate, as the church in Radymno was the site of the annual August pilgrimage of Greek Catholics from across the region.

First the church was destroyed during bombing at the beginning of World War I, and over the next couple of decades the local faithful rebuilt it. However, after the end of World War II and the deportation of Ukrainians, it became redundant in the renewed People’s Poland. In 1959, the government decided that the church was not an architectural monument, so in 1960 they started to demolish it. As the solid construction did not yield, a company that carried out demolition work in the quarries was asked to blow up the church. Building materials were then worth their weight in gold, but due to the explosion more than 60% of the bricks were not reusable.

On the place where the shrine stood, for a long time was a football field, now it is a green lawn in the center of a small Subcarpathian town.

The First ‘Nahirnyi’ in the Region

Less than seven kilometers from Radymno, above the river Szkło, stretches the village of Łazy [Ukrainian: Лази / Lazy]. At the beginning of World War II, it had 1,650 inhabitants, of whom 1,515 were Ukrainians. The villagers had their own school and reading room; there was a dairy, the office of the soltis [village head – ed.], and a Greek Catholic parish. St. Nicholas Church was built in 1894 on the site of a former wooden structure that burned down several years earlier. Historical records indicate that the first church on this site was built in the first half of the thirteenth century. However, the brick building, built in the late nineteenth century, was important because it marked a new stage in the development of a Ukrainian architectural style in Galicia.

The Church of St. Nicholas was one of the first projects of the already mentioned architect Vasyl Nahirnyi, and later became its first construction in the territory of Yaroslavl County. Although it is difficult to imagine now, there were no Nahirnyi churches in the Przemyśl (Peremyshl), Lubaczów (Liubachiv), or Boyko regions then. This was the beginning of a phenomenon.

The original style of Nahirnyi’s churches cannot be confused with anything. In the regions described, there are many churches, and they all have something in common. Most of them are built according to drawings in the shape of a cross, with one dome above the middle cross. However, each of Nahirnyi’s 204 projects was exceptional. In the Łazy church, the Byzantine style was special, noticeable, for example, in the 12-sided drum, which supported the dome, topped by a small lantern and a top with a cross.

We had three holidays: hungry or poor Nicholas, Lenten, and winter. The hungry or poor was in the spring, in May Nicholas — it was perednivok [the time before the new harvest]. The Lenten because it was on the Holy Cross, then there was a fast. And the cold one in winter, December 19. Unhappy holidays. When relatives came to visit from neighboring villages, they needed to be fed, and father worried. Because others had holidays on better days, and for us — what were we to cook during the perednivok, or during Lent, how were we to get so much fish?

The last liturgy in Łazy was held by the local pastor, Father Ivan Levytskyi, in May 1946, after which he was deported to Soviet Ukraine. After the complete eviction of Ukrainian residents, the church was closed for several years.

In 1955-1956 the building was gradually demolished. Its bricks, tiles, and tin were used by several locals who bought the structure as a source of building materials. They built stables, barns, and other agricultural buildings. In the early 1960s, only a meter-long part of the foundation of the church remained, on which fragments of white plaster on red brick could be seen in some places. Up to this level, the church was covered with rubble, earth, structural elements, which eventually rot and become overgrown with grass and weeds.

As if in parallel with the huge church of Nahirnyi’s in Radymno, the church in Łazy, which is twelve years its junior, disappears.

Thus, a cerkwisko appears in the very center of the village. Destruction occurs in public and in stages. The new inhabitants of Łazy are accustomed to seeing that mountain of stones; feet are already automatically bypassing the place that has to be bypassed. It seems that it is not a problem that there has been no shrine in the village for years. For Sunday liturgies they go a few kilometers to neighboring Moszczany, where they use the chapel at the nursing home.

Only in 2015 did they manage to build a modern church and create a new center of village life. The cerkwisko is just 25 steps away from it.

In 2019, thanks to funding from the Radymno gmina administration and private donations, it became possible to excavate and remove rubble and everything that has grown around for almost 60 years. During this work, a surprise hidden under the ground was uncovered: original tiles, which covered the floor of the sanctuary and the sacristy.

It was manufactured by Barta & Tichy from Prague, and supplied and installed in Lviv and the surrounding regions by a pioneer of the construction industry in Galicia, Professor Ivan Levynskyi. Vasyl Nahirnyi, who was united with Levynskyi not only through construction work, but also due to his open patriotic position and active socio-political activity, always used Levynskyi’s tiles in his buildings. However, not every village could afford a ceramic covering on the floor of its church — and this shows another peculiarity of the Church of St. Nicholas in Łazy. And it gives an idea of ​​the decorative details of the grand building in neighboring Radymno.

The large metal cross in the cemetery is the initiative of a local Pole. He himself asked me what he could do for us. Then, when I mentioned this in the village, I was told: “You don’t know? His father dismantled that church.” I think to myself: Who knows, maybe it tormented his or his father’s conscience?

During archeological excavations in Łazy, researchers found fragments of pottery from the Bronze Age. This caused a great stir. Tiles that are more than a hundred years old are no longer a sensation against the background of such a discovery.

So, for a year now in Łazy — in the open air, as in Pompeii — among the grass and stones lies a relatively well-preserved multi-colored cement tile floor. The colorful cerkwisko, which survived to this day by chance, is absolutely exceptional in this region.

Another vivid fragment of the mosaic of unwanted multiculturalism on the map of Polish Subcarpathia. Or just a curiosity, an exception. Another location in Google and on websites for travelers. If you look closely — the colors are fading. And in a broader perspective, all this reflects the unchangeable status: it is no one’s and not worthy.

Information about the church in Radymno is based on an article by Eugeniusz Misiło; the population of Łazy is from the site “Apokryf Ruski”; information about Vasyl Nahirnyi and the church in Łazy is from the publication “Нагірні, Леви: історія Родини”; advice on the origin of the tile from Areta Kovalska (Forgotten Galicia) and Tetyana Kazantseva (Ivan Levynskyi Museum).

Memories and a walk through Łazy — from a native of the village Andriy Chorny.

Photos by the author of the article