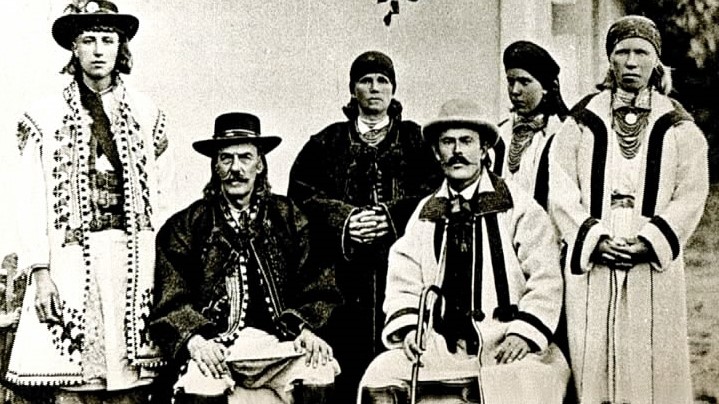 Boykos are the most enigmatic of the Ukrainian Highlanders and are extremely reticent, which is why they have experienced the least foreign influence.

At the mention of the Hutsuls, clear associations immediately emerge – kolomyiky, bartka (ceremonial axe), Arkan, Shadows of Forgotten Ancestors. Lemkos call to mind the Wisla campaign, the struggle for self-identification among the Polish and Slovak masses, poems by Bohdan Igor Antonych, primitive drawings by Nikifor Drovnyak. And what about Boykos? Apart from the famous wooden architecture, nothing comes to mind.

In fact, Boykos have their own kolomyiky [click here to listen to one], poets, and lost territory and diaspora. But because the Boykos are the most reserved among the Ukrainian mountain people and extremely reticent, therefore they experienced the least foreign influences.

Boykos only seem boring and mundane at first glance. Because they are too frugal, not talkative, careful with strangers, indifferent to jewelry and bright colors, and not at all very fashionable. In fact, the soul of the Boyko is a proud vessel overflowing with deep clear skies and the mythical archaic evergreen, blue-eyed Carpathians. A constant connection with Nature, seclusion high in the mountains and hard work, because only it will help one to survive – all of this is forever crystallized in the character of a Boyko.

The origin of the Boykos is one of the greatest mysteries of Ukrainian history. The lineage of Boykos has been so deeply lost over the centuries that Croatian researcher N. Klaich wrote on this topic:

“There has been more ink consumed than there are Boykos themselves.”

Not many facts have been definitively established, but there is plenty of evidence that the Boykos are the remains of assimilated Croat Boii-Celts. There are the so-called “long rectangular houses” – large residential and farm buildings, built without a single nail, housed under one thatched roof. There are the heroic hairstyles of the Ancestors, which were in evidence until the beginning of the twentieth century. Boykos braided the front side strands of hair over their temples, as the Boii-Celts once did. There are oatmeal dishes prepared according to ancient recipes. Oats were a component of bread and snacks and cookies. In addition, the Boykos genuinely believed that oatmeal gives strength and health, and prevents disease. It is known that the Celtic peoples also revered oats.

Finally, if you look closely at the Boyko’s embroidery, even with floral motifs, it is hard not to notice that the ornament is often divided into small squares and rhombuses. Perhaps it is also an echo of the Celtic love of plaid that is particularly colorfully found among the Scots.

Despite the fact that the Boykos outnumber the Lemkos and Hutsuls, they remain the least known and cannot boast of a prominent sub-ethnic identity. Unlike boastful Hutsuls, Boykos are not accustomed to self-aggrandizement. They are simply like a group of individuals placed among the picturesque Carpathian ridges once upon a time. Their god is freedom. Their philosophy is self-sufficiency. Their trophy is truth. Their life is mutual respect. And behind all this radiates love and harmony. Maybe that’s why it’s so hard to describe them. If the Hutsul can be recognized when he dances the Arkan and flashes the axe, the Lemko – when he speaks to you in Rusyn idiom, then a Boyko can be recognized in his silence behind his balanced, philosophical brow. The Boyko knows and contemplates.

Distant from the cultural centers, the valley dwellers – inhabitants of the lowland regions – often laughed at them. On the other hand, the lowlanders themselves were fascinated by their cool attitude and their ability to make almost everything they needed with their own hands (until the beginning of the twentieth century, the Boykos even made their own sewing needles themselves).

Boykivschyna is considered to include the southwestern part of Rozhnyativsky, almost all of the Dolinsky districts of the Ivano-Frankivsk region, Skole, Turkovsky, the southern strip of the Stryi, Drohobych, Sambir and Starosambir districts of the Lviv region, the northern part of the Mizhhirya and Velyky Bereznyak region. The heart of Boykivshchyna is Turka – the smallest district center of Lviv region, totaling 8,000 inhabitants, located on the river Stryi.