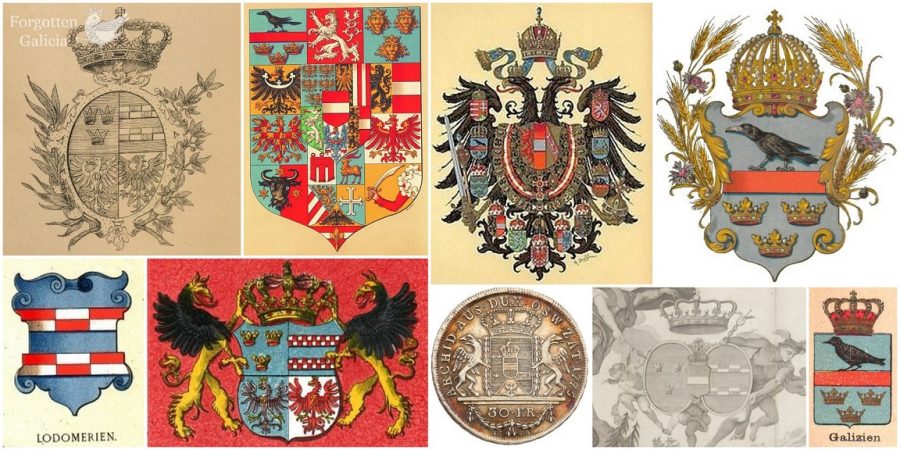 Today the jackdaw is the most recognizable symbol of the Kingdom of Galicia and Lodomeria; yet, this crow was not even found on the crownland’s first coat of arms, which featured three crowns for Galicia along with separate symbols for Lodomeria and Auschwitz (Oświęcim). Why was the first coat of arms like this and when did the jackdaw begin to represent the kingdom?

To shed some light on the origin, development, and variations of the coat of arms of the Kingdom of Galicia and Lodomeria, we must delve into the history of the region and understand what territories, former principalities and kingdoms comprised the province, as well as the different historical claims to these lands.

What Lands Made Up Galicia

In 1772, the Habsburg Monarchy, led by Empress Maria Theresa, Archduchess of Austria and Queen of Hungary, acquired the territory today known as Galicia. To justify the monarchy’s participation in the partitions of Poland, the empress revived old Hungarian claims to the land: In the thirteenth century the King of Hungary used the title Rex Galiciæ et Lodomeriæ, a Latinized version of the names Halych and Volodymyr, the major cities of the Principality of Galicia-Volhynia, which the Hungarians ruled from 1214 to 1221. Indeed, it is also why the Habsburgs chose to name their new crownland the Kingdom of Galicia and Lodomeria.

In fact, the territories acquired by Austria only roughly corresponded to those of former Galicia-Volhynia – the Russian Empire took control of Volhynia to the north-east, including the city of Volodymyr-Volynskyi – after which Lodomeria was named. Moreover, despite the fact that Austria’s claim derived from the historical Hungarian crown, “Galicia and Lodomeria” were not officially assigned to Hungary, and even after the Compromise of 1867, the territory found itself in the Austrian-administered part of Austria-Hungary.

On the other hand, much of Lesser Poland became part of Austrian Galicia. This included the former Duchies of Zator and Oświęcim (Auschwitz), small historical principalities west of Kraków. Here Empress Maria Theresa, who was also Queen of Bohemia, recalled old Czech claims to these territories.

While the composition of Galicia changed throughout the years, the core territory always included the area around Halych with the cities of Lemberg (Lviv) and Stanislau (Ivano-Frankivsk) in the east and Zator and Oświęcim in the west.

Each of these entities was formally separate; they were listed as such in the Austrian emperor’s titles, and each had its distinct coat of arms and flag. For administrative purposes, however, they formed a single province.

Prehistory – Coats of Arms Before 1772

The Lands of Halych (Galicia) and Volhynia (Lodomeria)

The lands that comprised the namesake of the Austrian crownland of Galicia and Lodomeria were once the Principalities of Halych (later adopted as Galicia) and Volhynia, which united in 1199 and became a kingdom in 1253.

The historical coat of arms for the territory around the medieval town of Halych was a jackdaw. One of the more widely accepted theories is that “Halych” derives from the Slavic word for “jackdaw”— “halka.” A jackdaw with folded wings was used for the coat of arms of the Principality of Halych in the twelfth and thirteenth centuries as well as on Boyar seals, while a jackdaw with unfolded wings was used for the Halych Land of the Ruthenian Voivodeship of the Kingdom of Poland starting from the fifteenth century.

Once united as the Kingdom of Galicia-Volhynia’s (1253–1349), the coat of arms was a golden lion on a blue shield. The lion was also depicted on the coat of arms of the Ruthenian Voivodeship (1434–1772) within the Polish-Lithuanian Commonwealth.

In Hungarian and Austrian Heraldry

In Hungarian and Austrian heraldry, the coats of arms of these territories had no or little connection to the historical arms and were likely invented by the imperial office. The coat of arms of Galicia dates back to the fifteenth century and originally depicted one crown — with time a second and then a third was added. The coat of arms of Lodomeria appeared in the sixteenth century and depicted two silver-red checkered beams in a blue field.

Both symbols were found on the seals of Hungarian emperors and kings of the Habsburg dynasty in the sixteenth century (from Ferdinand I), who used them as arms of pretension for the medieval principalities that comprised the Kingdom of Galicia–Volhynia.

These symbols were also used by Holy Roman emperors, who held the titles of Hungarian king, until almost the middle of the eighteenth century, including by Emperor Karl VI (1711–1740). It is around this time that the number of crowns on Galicia’s coat of arms reaches three and when a jackdaw appears.

This is likely the reason why even before the establishment of the crownland in 1772, the arms of pretension of Galicia on Hungarian and other seals of Empress Maria Theresa (1740-1780) depicted three crowns.

When the Kingdom of Galicia and Lodomeria was established in 1772, much of the territory had previously belonged to the Polish crown’s Ruthenian Voivodeship, the coat of arms which had been a golden lion in a blue field. As the lion did not correspond to the Austrian political declaration on the “return of ancient Hungarian provinces,” it is not surprising that for the new Kingdom of Galicia and Lodomeria, Chancellor Prince Kaunitz recommended “to keep” symbols corresponding to the claim.

Since the new province also included the former claim territories of the Czech crown — the Auschwitz and Zator principalities, it explains why this land was also represented on the coat of arms of the Kingdom of Galicia and Lodomeria, which consisted of three fields: in the first, the three crowns of Galicia; in the second, the checkered beams of Lodomeria; and in the third, a blue eagle in a silver field for the Principality of Auschwitz. A crowned Austrian coat of arms (a red shield with a white horizontal central stripe) was inlaid in the middle.

This coat of arms, in particular, was minted specially for Galicia on copper shillings and fifteen and thirty silver Kreutzer coins in the 1770s.

On January 27, 1782, Emperor Joseph II introduced a new four-field coat of arms for the four territories of the province — Galicia, Lodomeria, Auschwitz, and Zator: an oval shield in a gold ornamental cartouche topped with a crown and framed by palm and laurel branches, divided into four fields, where, apart from the symbols of Galicia and Lodomeria, were separate symbols for Auschwitz (a silver eagle with a golden letter “o” for Oświęcim on the chest in a blue field) and for Zator (a purple eagle with a golden letter “z” on the chest in a silver field).

The historical coats of arms of the Duchies of Oświęcim and Zator had both been eagles, with the corresponding letters on their chests. The color schemes for these two eagles not only changed over time, but are not always described correctly in publications and materials.1

Even though a new coat of arms was introduced 22 years later, this coat of arms from 1782 was used until the fall of the empire in 1918.

For example, various communities, district authorities, and institutions continued to use it on their seals, as can be seen here on a seal of St. Lazarus Hospital in Krakow from the early twentieth century:

It was also used on bonds and various publications:

And it can also be found as elements of architecture, in particular in savings banks:

Part of it can be found on the former Industrial School in Lviv built 1907-1909. The two eagles have been lost:

Here it is found on a Field and Forest Guard badge from the early twentieth century:

The Coat of Arms of 1804: (Re)introduction of the Jackdaw

“The middle shield is divided by a red line, on which a black jackdaw stands in a blue field, in the lower part there are three golden royal crowns, two above, one below, in a blue field because of the Kingdom of Galicia (Halicz). It is topped with the Royal Galician hoop crown.”

While the new coat of arms with the jackdaw became the new official symbol of the Kingdom of Galicia and Lodomeria, the coat of arms of Lodomeria was still used in reference to this territory only, including on some of the greater coats of arms of the empire.

The coat of arms of 1804 was used for the crownland until the fall of the Austrian Empire. It was used in various places, in publications, on maps, as elements of architecture, and so on.

On the city hall in Sokołów Małopolski, and on the Sokół Gymnastics Society Building in Brzozów, both today in south-east Poland:

Postcard from 1907 with the coats of arms of Galician cities with the Galician coat of arms in the middle:

A book of Galician and Bukowinian coats of arms. The cover page features the coats of arms of Krakow, Lodomeria, Zator, Bukowina, Oświęcim, and Galicia:

Usage in the Coats of Arms of the Empire

The coat of arms of the Austrian Empire and then the Austro-Hungarian Empire evolved over time, often to reflect changes to landholdings. Furthermore, each coat of arms had different versions for different purposes: a heavily simplified “lesser” version, a “middle” version, and a full or “greater” version, which was restricted for use by the monarchy or in other specific circumstances. In later years, however, only lesser and middle versions were used.

As the “middle” and “greater” versions also included the coats of arms of the crownlands — and sometimes even the separate lands that they comprised — including of Galicia.

In 1804, Holy Roman Emperor Francis II founded the Austrian Empire and became Francis I, the first Emperor of Austria, ruling from 1804 to 1835.

On the middle coat of arms, a split shield with the three crowns of Galicia and the beams of Lodomeria was used.

On the greater coat of arms, Galicia’s new coat of arms with the jackdaw appears, and Lodomeria is presented separately as are the territories of Auschwitz and Zator.

On the middle coat of arms, the new coat of arms is used for Galicia, while on the greater coat of arms, Galicia is represented not only by the symbols of Galicia, Lodomeria, Auschwitz, and Zator, but also of the Grand Duchy of Krakow, Massovia, Sandomir, Volhynia, Lublin, Podlachia, and Brzesz. Some of this land was lost in 1809.

On the greater coat of arms, the four territories: Galicia, Lodomeria, Zator, and Auschwitz.

The Austro-Hungarian Compromise of 1876 until 1918

The coat of arms of Austria-Hungary was that country’s symbol during its existence from the Austro-Hungarian Compromise of 1867 to its dissolution in 1918. The double-headed eagle of the ruling House of Habsburg-Lorraine was used by the common Imperial and Royal institutions of the dual monarchy. Additionally, each of the two parts of the union had its own coat of arms.

Austria’s coat of arms on the left with Galicia’s arms in the upper-left corner; Hungary’s on the right.

Coats of Arms of Crownlands

Coats of Arms of Archdukes of Austria

The coats of arms of Galicia and Lodomeria could also be found on the arms of Austrian archdukes from 1816 and 1896 (colored versions below).

The United States of Greater Austria – Proposal from 1906

The United States of Greater Austria was a proposal, conceived by a group of scholars surrounding Archduke Franz Ferdinand of Austria, that never came to pass. This specific proposal was conceived by the lawyer and politician Aurel Popovici in 1906 and aimed at federalizing Austria-Hungary to help resolve widespread ethnic and nationalist tensions.

In particular, it was proposed to divide Galicia into two parts:

Today, the enduring symbol of Austrian Galicia has remained the jackdaw — this is also what inspired me to use a crowned jackdaw as the logo of the Forgotten Galicia blog.