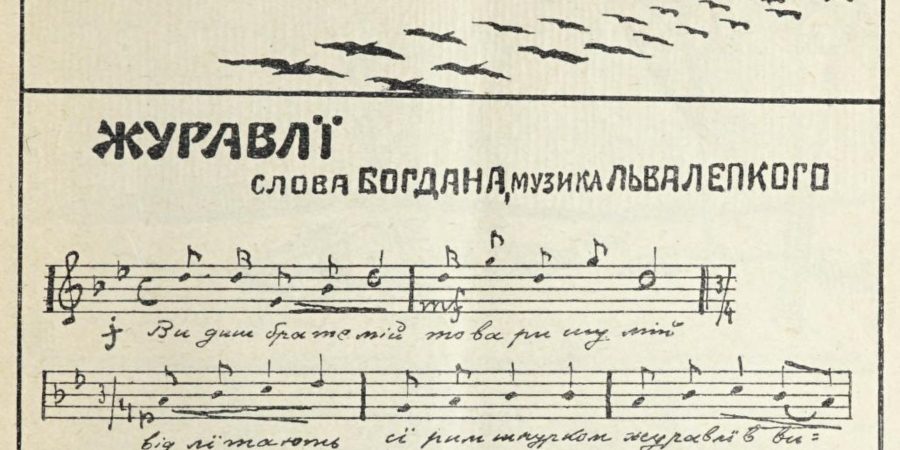 I recently discovered that one of my favorite Sich Riflemen (a Ukrainian unit within the Austro-Hungarian Army during WWI) songs, “Chuyesh, brate miy” AKA “Vydysh, brate miy” (Do you hear, my brother), was written in Kraków. It turns out that the song was based on a poem called “Zhuravli” (Cranes) written by Galician Ukrainian poet Bohdan Lepkyi in 1910. I discovered this fact after visiting his grave in Kraków’s Rakowicki Cemetery in July.

The Origins of the Song

Bohdan Lepkyi said that it was one of Stanisław Wyspiański’s plays that inspired him to compose the poem: “In the fall of 1910, in Kraków, I was walking home after viewing a theatrical production of Wyspiański’s drama Noc Listopadowa. The withered leaves rustled beneath my feet, and departing cranes were trumpeting high above. The poem seemed to come by itself, without my knowledge or effort. My brother Lev Lepkyi, a Sich Rifleman, set it to music and this composition became a favorite Sich Riflemen song.”

Do you hear, my brother,
My comrade,
Fly’in’ away in a gray line
The cranes for winter.

Glim’rin’ in our eyes
Is the endless flight,
Perishing in the dark clouds
All traces of the cranes.

Crying: kroo-kroo-kroo,
In a foreign land I’ll die,
By the time I cross the sea,
I’ll wear, away my wings,
I’ll wear away, my wings.

Cranes were associated with Polish insurgents who rose up to fight against foreign oppression in November 1830 as well as with Galician and Bukovуnian Ukrainian emigrants who were forced to seek a better fate abroad.

The poem was first published in October 1912 in the Lviv literary and art magazine Nedilia. In 1915 in Vienna Lepkyi published a collection of works dedicated to the Ukrainian Sich Riflemen, which included the lyrics and melody of the song “Zhuravli.” Below the song an image was included of a fallen rifleman drawn by famous artist Olena Kulchytska.

How the Song Spread

The poet’s son, Lev Rostyslav, said the following of the song: “The song was popularized by the Sich Riflemen in the Carpathian battles. It quickly spread beyond the Zbruch. It was brought to Kyiv by Dr. Stepan Fedak from Lviv, who was taken away as a war hostage by Muscovites. It became known not only among the citizens of Kyiv, but also reached the farthest corners. For example, it was sung in the spring of 1915 by the Kuban Cossacks who were captured in the Carpathians, so at first this song was called ‘Kubanska.’ The captured Ukrainians who were in the German camp in Wetzlar said that even in the distant Zeleny Klyn [Ukrainian name for land in the Russian Far East] the song ‘Zhuravli’ was loved very much. […] It was harmonized by various musicians, in addition to the Sich Rifleman composer Hayvoronsky … Stetsenko, Koshyts, Leontovych, Yaroslavenko, and others […] ‘Zhuravli’ has been translated into Yiddish, Japanese, German, and Polish. […] In Soviet songbooks, ‘Zhuravli’ is presented as a folk song.” (Bohdan Lepky 1872-1941: His Life and Works)

Ukrainian writer Yuriy Smolych in his novel The Dnipro Roars and Moans recalls how in 1917 in Kyiv the song “Zhuravli” was sung in the “concentration camp behind barbed wire”:

“Galician prisoners of war sang as soon as they returned from their hard labor: they crushed stones to make cobblestones near Lantsiuhovyi Bridge. They sang their song every night, night after night, and it was like an evening prayer before going to sleep. They have been singing it for days, months, and it is not the first year. And it was not even a song, but prayers of supplication: a call for help! …This song was already well known in Pechersk. And when it appeared from the abyss under Cherepanova Mountain, on all the cave gardens, on the slopes and hills from Klovska to Kosy Kaponir, all the other songs stopped at once. People listened to the sad melody and tragic words and mourned with the singers over their bitter fate.”

As a Galician Funeral Song

Since around 1915, “Zhuravli” has been used as a “Galician funeral” song, as noted in Lepkyi’s Chervona Kalyna. First it was sung at the funerals of the Sich Riflemen and soldiers of the Ukrainian Galician Army, later at the funerals of other Galicians, especially prominent and creative personalities (musicians, artists, writers, etc.).

Popular among those who had to leave Ukraine, the song also became important in the diaspora, where it was often sung at the conclusion of military funerals.

Lepkyi himself died “in a foreign land,” as the lyrics go: after the farewell speeches at his funeral in 1941, it was said that the sad song “Vydysh, brate miy” drifted in the silence of the Rakowicki Cemetery.

“This song, lyrics by Bohdan Lepky, music by Lev Lepky, is sung at most Ukrainian diaspora funerals. It is a song about the cranes that have flown away, and the ones that will leave this world away from their Ukraine. Choral and bandura arrangement by the legendary Hryhory Kytasty, sung by his Ukrainian Bandurist Chorus with soloist P. Honcharenko. Recorded in 1975. Artwork by Edward Kozak – it is the first rendering of the Kozak Bandurist which has since been a logo for the group (in its different reincarnations) to this day…”

Kvitka Cisyk – “The Cranes Are Flying”

Ukrainian Dumka Chorus · “Chuyesh, Brate Me? (Do You Hear Brother?)”