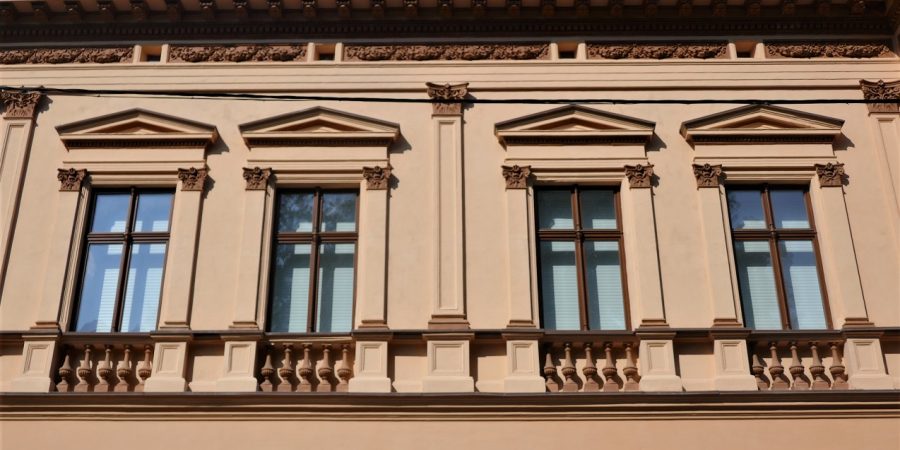 The blind balustrade, like the blind window, is an element of architecture that has an aesthetic rather than utilitarian function. Instead of forming the protective edge of a balcony or of a change of level, blind balustrades are applied to the wall surface to add ornamentation to the façade or to keep uniformity with real balconies or balustrated windows.

The balustrade with classical balusters, the small bulbous vase-shaped pillar supports, first appeared in Italian Renaissance architecture, as did the “blind” variant. Both variants remained popular in many architectural styles throughout the centuries. The shape of the pillars themselves changed according to the architectural style in which they were used.

In Lviv, blind balustrades are very popular in Historicism (neo-Baroque, neo-Renaissance, neo-Gothic), and are also found in Baroque-inspired Secession as well as neo-Classicism/Art Deco.

They are ubiquitous in cities around the world. Once you first notice them, you start seeing them everywhere (the frequency illusion). Indeed, in the historic center of Lviv itself it seems as if every other building features it.

Vase-shaped balusters were used especially in Baroque and neo-Baroque architecture.

Sometimes the blind balustrade looks like a mini blind arcade — an arcade that is composed of a series of arches that has no actual openings, a common decorative feature on the facades of Romanesque and Gothic buildings.

Another widespread style of Baroque balustrades found as blind balustrades. Found on Neo-Baroque and Neo-Classical buildings in Lviv.