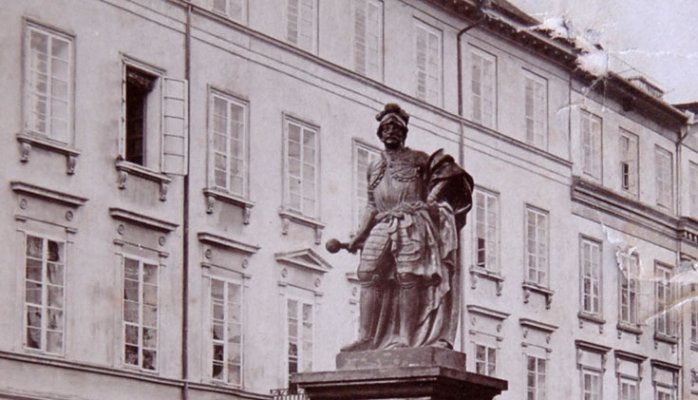 At the intersection of Shevska and Teatralna Streets in Lviv’s Old Town is Stefana Yavorskoho Square. It does not strike a visitor as a particularly historic place. The square has a couple of cafes, eating establishments and a boutique store. Across the street is the St. Peter and Paul Garrison (former Jesuit) Church, but from the square, only one side of the church can be seen. Parked cars usually line Teatralna obscuring views in that direction. This area seems like the last place a visitor would come to find a historic first. If they do come looking though, there is nothing left to see. Ghosts rarely leave traces, even those made of bronze and stone. More to the point, conquerors do not leave the monuments and memorials of the previous rulers in place. They carry them off either to storage, to be melted down or shipped to the homeland of the honoree. History is not just written with ink or computer keystrokes, but also sculpted in bronze and stone. Like all history this can be revised, altered, or destroyed.

Stefana Yavorskoho Square was once the setting for Lviv’s first secular monument, a monument to the Great Crown Hetman and Polish nobleman Stanisław Jabłonowski. The monument played public peek-a-boo, in a sort of now you see it, now you don’t game for almost two hundred years. It vanished then reappeared only to disappear forever not long after the outbreak of the Second World War.

The monument’s checkered past is memorable for two reasons. One is because of its status as the city’s first monument. The Jabłonowski monument also has similarities with many other monuments that once stood in Lviv, but can no longer be seen. Public space in the city has been contested space for monuments ever since the first one appeared. These monuments not only honored men, but they were also symbolic of a particular empire, nationality, or ideology. The Jabłonowski monument was guilty of the latter two. As such it was seen as a threat. It is hard to believe that inert pieces of bronze and stone can cast aspersions on a conqueror’s narrative, but they always have and likely always will. It is as much about what they represent as who they portray. To his proponents and opponents, Stanisław Jabłonowski came to represent one thing in life, but in death he was symbolic of many other ideas that were deemed dangerous.

Warfare—that one word more than any other signifies Jabłonowski’s life. He spent forty years engaged in military campaigns across eastern and central Europe, from the plains of Moldova to the Gates of Vienna. One of his martial exploits, defeating Tatar forces in the Battle of Lwów in 1695 and lifting a siege of the city, earned him the undying gratitude of Lvivians. For this feat of arms, Lviv’s wealthy citizens commissioned a statue of Jabłonowski by master sculptor Sebastian Fesinger. Fesinger’s sacral works still adorn several churches in Lviv, most prominently the spectacular main altar at the former Jesuit Church. His completed monument of Jabłonowski was unveiled in 1754. The Great Crown Hetman was portrayed in full military regalia with a buława (ceremonial mace) in his right hand, looking thoroughly royal with a noble air of confidence. The monument first stood in the courtyard of the former Jesuit Church. Despite the reverence shown to Jabłonowski in Fesinger’s work, the monument was removed from its original placement when the church underwent renovation. It was then misplaced, disappearing from public view for many years. Only when a journalist rediscovered the deteriorating monument sitting in the backyard of a home was it fully restored.

Now You See It, Now You Don’t – Disappearing Acts

The monument was then placed on the main city boulevard (today’s Prospekt Svobody), then known as Hetman’s Ramparts, the name also paying symbolic homage to Jabłonowski. There it stood in front of the National Museum until World War II. Since the city at that time was part of the Second Republic of Poland and half of Lviv’s citizens were ethnically Polish, having a national hero like Jabłonowski displayed in such a prominent place was totally logical.

When the Soviets invaded and then occupied Lviv in October 1939 a different type of logic took hold. The Soviets were anti-noble, anti-national, and anti-Polish in outlook, especially when it came to Lviv. The Soviets did not believe in building upon the old—they destroyed or looted the past. Their method of creating a new world in a conquered hinterland was through destruction and theft rather than co-option. Due to its prominent location, the Jabłonowski monument had to go. Unlike the last empire to occupy Lviv, the relatively tolerant Austro-Hungarians, the Soviets had no use for Jabłonowski. He symbolized what they opposed. The monument soon vanished and has never been seen since.

Most likely the Jabłonowski monument was melted down. There is a distinct possibility that its remnants were encased in another monument. If that monument happened to be a Soviet one then it too has likely disappeared from Lviv. The ghost of Lviv’s monumental past may be little more than broken pieces of concrete and melted bronze. Most monuments in the city have either been replaced or the spaces they once inhabited remain vacant, only to be surrounded by cafes, restaurants, and capitalism.

Thousands walk past Stefana Yavorskoho Square and have no idea what once stood in that little square. Neither do they care. Why should they? Life and commerce go on. The past disappears with every new development. Nothing lasts forever. That is certainly true of Lviv’s first monument. It is also true of all the monuments that disappeared during the city’s tumultuous twentieth century. And it will surely be true of all the monuments that stand in the city today, but sometime deep in the future will vanish and be relegated to oblivion. In that sense the Jabłonowski Monument was is and always will be the most enduring symbol of the inevitable decline of Lviv’s monuments.