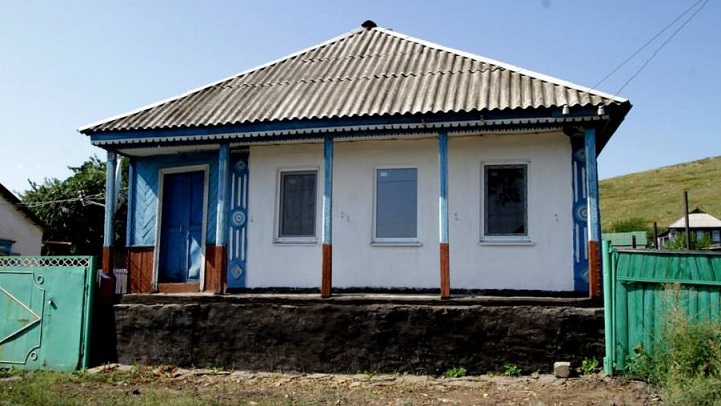 I read an interesting article in Ukrainian, in which the author uncovers the original purposes of the layout of an old Kozak village and the design of the houses. Below is my translation of most of it. The link to the original article and a few more photos can be found here.

Among the modern mining settlements in the far eastern Ukrainian region of Luhansk, the author of the article found an ancient village called Naholno-Tarasivka. Its official founding date is 1775.

“…in place of fences the old streets of the village have solid stone walls, interrupted only by the houses. Houses here were built on the outer part of the plot with façades directly overlooking the street. As such, fences and buildings created a continuous stone wall along the street. 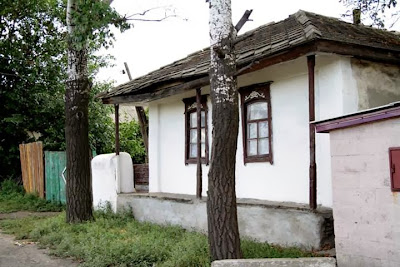 “To understand the reason for this and other arrangements, which will be discussed further, let us return to a time when the Ukrainian steppe was an undeveloped Dyke Pole (Wild Fields), on which only a small number of settlements were scattered, and where spontaneous Tatar raids were not uncommon. On the façade side of every house was an unusually high and wide pryzba (mound of earth along the outer walls of a peasant’s house), over which hung the roof, propped up by three or four thick wooden pillars…in reality the pryzba with pillars was invented by the Kozaks 300 years ago…to easily dismount from a horse and tie him to a pillar, and later, conversely, to easily mount the horse without jumping. For this reason, the façades of the houses lined up to the edge of the street without being surrounded by a fence.

“However, the most interesting arrangement that can still be seen in Naholno-Tarasivka is a small narrow door, located at the front of the house facing the pryzba….The purpose of these doors was to defend the buildings from Tatar raids.

“We have to imagine life 300 years ago. Suddenly, a band of Tatars on horseback flies into the village. The attackers can only go along the road, as it is surrounded by a solid wall of stone fences and houses. From the narrow door it is easy to shoot. And, when attackers try to get inside a house, they can do so only one at a time through the narrow door — and only by bending over. In this situation, the house can be protected even by a woman home alone during the attack. So ultimately every house and the village as a whole is a fortress. Today, however, neither tourists nor the residents of these unique Kozak houses know about it.”