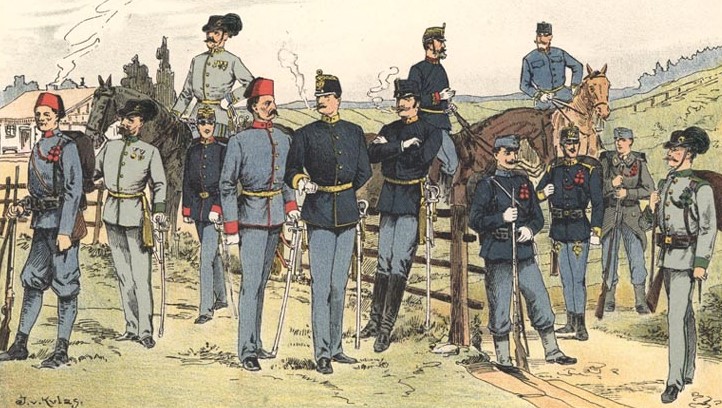 Through dangerous gamesmanship of its nationalism policy by mixing concessions with brutally underhanded tactics to manage competing national projects, the Austrian-Hungarian Empire cultivated a great deal of conscription units from the territory of Galicia prior to, and through World War One. The course of dedication to state service would provide both the Ukrainian and Polish national projects unique footing and would profoundly shape corresponding national trajectories through the inter and postwar era. Both nationalities, however, were fundamentally marked by a great deal of initial allegiance to the Austrian-Hungarian state.

In terms of composition of nationalities, one analysis in 1865 had given Poles and Ruthenians almost 18% of the total strength of the Northern Imperial army with Ruthenians compromising the majority. This was an enormous amount of respective manpower and dwarfed even the Magyar representation in the Northern Army, which stood at approximately only 6%.

However, the Austrian-Hungarian Empire became de jure a dual monarchy after the compromise of 1867. Official state policy had to remarkably pass in dual parliamentary systems before becoming policy of the crown. And while army organization had fell under the direct control of the Emperor, it was divided into three equivalents: Hungarian Landwehr, Austrian Landwehr, and a jointly fielded Common Army.

One the eve of WW1 an almost equal amount of Poles and Ukrainians were in the Austrian-Hungarian Common Army registers, with Poles now composing a razor thin majority. This was despite the well documented over representation of Poles in the Austrian bureaucracy. That is, if the common army was reflective of the overall trend in conscription of nationalities for the Empire, the imperial military was one of the few institutions where both Ukrainians and Poles had at least a surface level of comparable representation in terms of service.

Loyalty to the Austrian state from the Ukrainians stemmed to a great degree from the abolishment of obligatory labor to the estate (the Corvee) in 1848 – by in large the biggest economic concession to Galician and Bukovinian Ukrainians as an agrarian class in the 19th century. Despite attempted national uprisings by the Polish nobility, a large underclass of Galician Poles in the empire remained unsympathetic to a popular national revival before the end of the Great War. Many Poles enjoyed comfortable positions in the civil administrative apparatus of Austrian Galicia.

This is not a completely exhaustive list but through 1914 Galician units of the Austrian military (by majority of Polish/Ruthenian ethnic representation) consisted of the following;

Upon examining the names of the 5th and 7th we can get get a glimpse into how seemingly paradoxical the imperial state behavior around nationality was. One unit drawn of Ukrainians and Croats was named after the head of the chief rival power, and another was named immediately after the Archduke Ferdinand himself. In fact, the 7th did not have a historically fixed title for their regimental name, but they would personally stand guard at the Archduke’s funeral in 1914 – highlighting the loyalty of the Galicians to the Austrian leadership.

From the Common Army fielded in 1914-1918 Galician-Bukovinian regiments fielded approximately 25 of 132 infantry and light infantry regiments, or approximately just over 5% of the total infantry strength of the common army. A list of those units can be found here: Austro-Hungarian Infantry 1914-1918

But while Austria-Hungary managed to maintain a fairly serviceable portion of Ukrainians in the wartime period, the structure of military organization reflected the position of the Polish in Galician society, where officers of Galician units were by far Polish. This experience of Poles as leaders in the military apparatus may have proven invaluable in Polish victories under Józef Piłsudski in the Polish-Ukrainian, and later Polish-Soviet wars. These men were in many ways the bedrock of the Second Polish Republic.

Ukrainians did gain a unit during the course of the war which served as a marker of the coming ethnically homogeneous Galicia: the exclusively Ukrainian unit of the Sich Riflemen. This unit would serve in the Austrian Landwehr during the early period of the war and is citied by many historians as the mother unit which to which much of organization of the Organization of Ukrainian Nationalists-Bandera Faction (OUN-B) can be traced.

8 thoughts on “Galician Military Units of the Austrian-Hungarian Empire”