Uzhhorod (Ungvár / Užhorod / Ungwar), a city in Transcarpathia (Zakarpattia Oblast of Ukraine), which is near the borders of Slovakia and Hungary, has a multicultural history. For a long time the region around Uzhhorod was part of the Kingdom of Hungary, later the Austro-Hungarian Empire. After WWI, it was annexed to Czechoslovakia. In 1938, Uzhhorod was transferred to Hungary, and in 1945 it was annexed by the Soviet Union. After the breakup of the Soviet Union, the city became a regional capital in Ukraine.

On a visit to Zakarpattia last year, I found two great ghosts signs in Uzhhorod. Both of them are probably from the 1930s, when Uzhhorod was part of Czechoslovakia. During those years, both Hungarian and Czech would have been used for signage. It is possible that in the second image, the Czech translations were below the Hungarians signs on the sides but were painted over during the Hungarian period 1939-44.

The featured image has signs in both Czech and Hungarian. In the center it reads: FRESH Roasted coffee, tea, butter, Prague ham, cheeses. On the sides it reads: Beer, wine, liqueurs, mineral water. 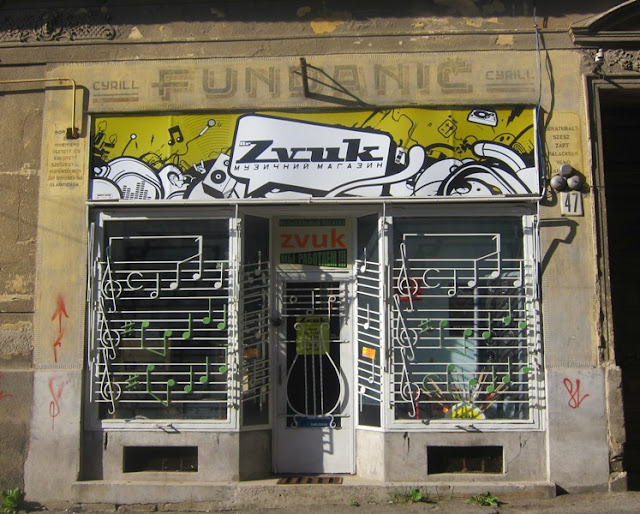 Thank you Studiolum for help with translations and information.

2 thoughts on “Ghost Signs in Uzhhorod”