Several years ago I read about an old Jewish prayer room that was discovered in the basement of a building in Lviv. Finally, thanks to my friend Sarah who obtained instructions on how to find it, I was able to see it in person. (Though only on our second attempt did we actually find a way inside. More about our adventure can be found in Sarah’s blog post.)

Tucked away in the corner of a not-so-easily-accessible courtyard is a small staircase that leads down into the basement room that housed the prayer room. The only remnant is the painted ceiling with two lions and the Ten Commandments.

The history behind this prayer room — when it was established and why — is still unknown. But according to Jewish Family Search: “Most probably this was a private house owner’s prayer room or a shtiebel for Jewish families living nearby.”

The room is found in a building that dates from 1911, in a neighborhood south of the city center (which by the way was not one of the former Jewish districts). 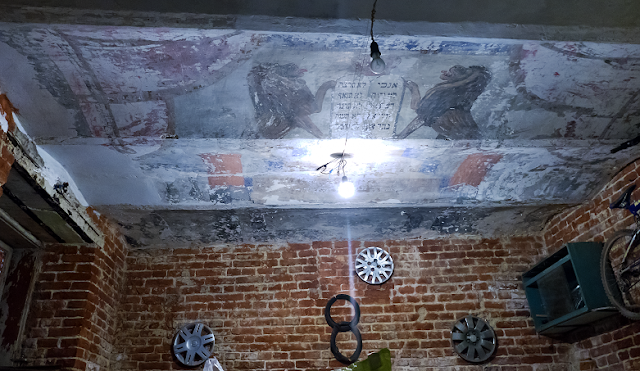